Join us on social networks :

In the list of complaints addressed to open spaces, distraction comes first. Noise, movement, gossip… Yet the millennials continue to plebiscite them.

As a result, when faced with noise in the office, not everyone is equal. Young people find it stimulating, seniors find it horrible. But in both cases, 99% of us see open space as a source of distraction. 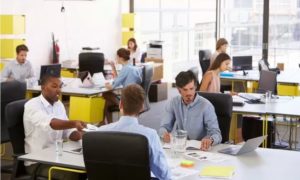 The worst are colleagues who speak loudly on the phone (76%), then the colleagues who have a conversation close to people who are not involved (65%). Situations that get worse if these events take place during telephone or video meetings.

So why do young people like open spaces so much? Paradoxically… it’s also the interaction with their colleagues. The younger you are, the more you want an open work environment! Only 38% of baby boomers like open spaces, compared to 47% of Generation X, and 55.5% of Gen Y and Gen Z.

The solution: the creation of specific areas?

A bit like in trains, one could imagine the creation of special areas to make phone calls or chat. In any case, this is what more than half of the people surveyed agree with. They want clear distinctions between quiet and noisy areas, with clear associated rules.

Finally, 75% of people believe that this is a management issue. For Jeanne Meister, co-founder of Future Workplace, it’s time to get started: she reminds us that with the arrival of the Z’s on the job market, four generations are now collaborating – forcing companies to adapt their vision and definition of traditional work, whether in organization or office design.

Methodology of the study :

The results of the study are based on a global survey conducted by Savanta in the United States, Canada, Spain, the United Kingdom, Germany, France, China, Australia, New Zealand, Japan and India from 18 to 26 March 2019. 5,150 people were asked about office dynamics, distractions and benefits in their company’s office. The study targeted employees who work a minimum of three days in an office and in organizations of various sizes. Every respondent successfully completed a dual sign-up process and completed an average of 300 profile data points before participating in the survey.